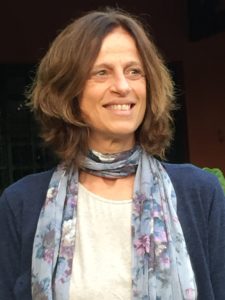 I first met Meir Schneider in 1992. He was in Brazil lecturing for an audience of 600 people. I was there just to give emotional support to my niece, the organizer of that event. I had no idea of the tremendous shift that it would cause in my professional life _ from being a dancer and a historian, I became Self-Healing instructor and practitioner, specialized in vision education.

For ten years I dedicated myself to help people overcome their vision problems using exclusively the self-healing method. In 2003 Meir introduced me to Dr Raymond Gottlieb, a holistic optometrist, who worked with a very powerful technique called Syntonics Phototherapy. It consists in the application into the eyes of selected light from the visual spectrum to regulate functional unbalances of the visual system. However, in order to become a Syntonist, one has to be an optometrist. So, in 2005 I was enrolled in a program at an optometry school ( Instituto Filadélfia, São Paulo, Brazil). At first it sounded very strange for me to learn how to prescribe glasses to people while my goal was to teach how they could get rid of them. Soon I understood that there is much more to it than simply lenses perscription. In 2014 I got a degree in Behavioral Optometry by Instituto Thea (Florianópolis, Brazil) in collaboration with the Sanet – Vision Seminars (San Diego- CA, USA). In 2015 I was given the degree of Fellow of the College of Syntonic Optometry.

I have learned different paths in vision rehabilitation, and I collected valuable tools to my toolbox. However, the philosophy that guides my therapeutic thinking comes from the Self-Healing Method. I am very thankful for having gone to Meir’s lecture back in 1992.

Presently I have an office in a house that I share with other health professionals, all compromised with a more holistic approach.