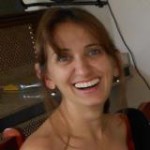 When Laura Canto graduated in occupational therapy from the State University of São Paulo, Brazil, in 1994, her dream was to work in a conventional way with people who had limited movement and physical disabilities. From 1995 to 1996, she worked at a rehabilitation center for disabled children, and then for a mental health service. In the latter position, she started to use bodywork techniques to promote the physical and mental health of patients, and even felt the need to specialize in that area.

Laura went on to practice occupational therapy throughout her twenties and became well known in her field as a caring and respected therapist. After several years, however, she felt the need to help people beyond what her training and experience allowed, so she searched for greater knowledge and capacity. Through a fellow occupational therapist, Vivian Nassif, she heard of a revolutionary course taught by Meir Schneider and was introduced to Beatriz Nascimento, who had overcome muscular dystrophy and eventually became a highly proficient teacher of Meir Schneider’s Self-Healing Method. Because of their association, Laura did Segments A and B (Level One) of the Self-Healing Practitioner/Educator Training Program, in 2003 and 2007 respectively, both with Beatriz; in 2008, she did the advanced training, Level Two with Meir. Since 2003 she has been seeing patients in her office in Piracicaba, and in 2012 she graduated as an instructor of Self-Healing. Laura went on to become a champion of Meir Schneider’s method, and her work has been accepted in regular circles in Brazil, where she also promotes Meir’s classes whenever he holds them in her country.

In her practice with the Self-Healing Method, Laura Canto discovered that “across different corporal resources, we can awaken the movement in its purest form, simple and powerful, rescuing all the force of life that resides in [the patient]. It is a practice where patient and therapist together are invited to try and stimulate their creativity at each session, challenge paradigms, connect to the subtle world, and experience the healing power of love.”

Her personal and professional experience also showed her that the Self-Healing Method went far beyond the expectation of preventing and treating diseases. She intuitively realized it could be an aid in her search for “a full existence, an experience of love, a release of libido, and a pathway to reach happiness.” It was in fact the catalyst to having one’s whole being respond with health. In addition to cardiorespiratory fitness, muscle strengthening, stretching, and various physical improvements, for Laura Self-Healing fulfilled yet another role: being one with the psyche.

One of Laura’s most rewarding experiences occurred in Maringa, a southern Brazilian city 600 kilometers away from her hometown of Piracicaba. There, she conducted two lectures and many individual sessions. One was a morning lecture in the Amphitheater of the Municipality of Maringá, with about 60 people in attendance. According to Silvana, the organizer, the audience consisted of quite a few politicians, doctors, dentists, and other healthcare professionals. Then her evening lecture took place at the Unit of Applied Psychology, State University of Maringá (UEM), which yet another 60 people attended; besides the general public, there were physiotherapy students and university staff present from UEM and also from CESUMAR, a large private university in the same city. That one day of lectures resulted in many new contacts with the municipal government (Department of Health) and with both universities.

Another consequence of the lectures was that, when everyone got up several times, stretched, and practiced sunning and palming together, Laura noticed how people were willing to rethink the use of their body and became open to discovering new possibilities of moving, acting, thinking, believing, and being. Additionally, from the personal sessions she conducted, Laura obtained other beneficial outcomes, including one from a patient with amyotrophic lateral sclerosis (ALS) —  more commonly known as Lou Gehrig’s disease, a neurodegenerative disorder that usually leads to death in about 4 years after its inception; this patient could finally breathe while lying down and stand without crutches.

Another patient, who had lost sight in her right eye for 8 years (due to glaucoma), was found to have residual vision. Lastly, an elderly woman, who suffered from severe osteoporosis and had several spontaneous fractures, rediscovered a new way to move her legs without risk, and even learned a simple technique of self-massage to stimulate the production of bone matrix.

More recently, Laura Canto is awaiting the return of the rector of UEM for partnership in organizing the Level One part of the Self-Healing Program, the first of its kind in southern Brazil, which will then be considered as a university extension course. Besides that, a professor of physiotherapy, along with her ethics committee at CESUMAR, will be put at Laura’s disposal for publishing scientific articles. In fact, Today News, Laura Canto’s local newspaper, has already interviewed her and said they were open to printing other articles about her work because they feel the subject is very interesting.

All in all, Laura Canto is satisfied with her work and feels she planted a seed in very fertile ground. “I believe this is what happens when we focus on something bigger than ourselves,” she says without any trace of self-importance. “I have roots in Piracicaba and my work is going very well around here. But…Self-Healing has to take new roads and new air. I feel that this first stage of our mission was successfully executed.”

What a triumph for someone who came from the conventional world but thought outside the box and, in doing so, improved many lives.

This site uses Akismet to reduce spam. Learn how your comment data is processed.